My fourth exhibition of 2018 in nearly upon us (I’ve dropped the bus analogy……. )   “TERRE/TERROIR” starts on July 12 and runs until September 12.  It will be hosted by Jean Jacques Bousquet at Le Domaine de la Garde in Labastide Marnhac, which isn’t far from Cahors in the Lot (46).  Jean Jacques’s “terroir” straddles the Cahors and the Coteaux du Quercy wine regions and he will be serving several examples of  wines from both his vineyards  at the “Vernissage” on THURSDAY 12 JULY (6PM).  If anybody out there in Blog-land is within spitting distance (as it were) please do drop in and sample his wines and my etchings!    For more information about Le Domaine de la Garde, please check out the website  http://www.ledomainedelagarde.com.  Some of the more recent of my etchings which will be exhibited in “Terre/Terroir” are illustrated below……….. 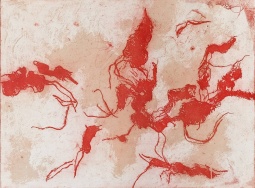 Posted on March 3, 2018 by rosalind marchant

Well, it’s a bit like buses – you wait for months and then four come along at the same time. And it seems that I have four exhibitions this year in SW France. The first one has already started – the “vernissage” is on Sunday.  It’s at the Maison Jacob in Castelnau Montratier and is called “Le Mois Du Rouge” and features 8 artists who, you guessed it, all work a lot with the colour RED. I attach a poster (I hope).  And one of my “Ruby Gap” prints – all 4 of which are on show until the end of March at the Maison Jacob.

The second bus (as it were) is JEMA which I will be taking part in for the third year running and, as last year, I will be exhibiting with Marjon Mudde and Rafaele Rohn at the ADPIC studios in Lauzerte.  I attach an image of one of the etchings on show there!  FANCY THAT, MORE RED!!!!  JEMA takes places in several locations in Lauzerte (and all over the country!) on 6/7/8 April.   Check out the JEMA website for more info :  http://www.journeesdesmetiersdart.fr

The third exhibition this year is another group show and its in Lauzerte again, at the Espace Art Points de Vue from 11-26 April.  It’s a print show featuring 11 artists – 5 french and 6 english.  It’s called “PLANT LIFE IN PRINT/IMPRESSIONS VEGETALES. The english artists taking part are all members of the “FINGERPRINT” group based at the Dove Studios near Glastonbury in Somerset …..  which is a group I still belong to even though I haven’t lived in the UK for 10 years.  Alongside the exhibition there will be two etchings workshops (one run by Bron Bradshaw from the Dove, and one run by Marjon Mudde from ADPIC).  Below are some of the images that will be included in the exhibition – from left to right, two prints by Bron Bradshaw, one by Jenny Graham and one by Jacy Wall.

The fourth 2018 exhibition is still a bit of a mystery !  Suffice to say it involves several artists exhibiting in vineyard “chais” around Castelnau Montratier in July, August and September.  WATCH THIS SPACE…….

I have actually started making some NEW ETCHINGS.  Actually, I haven’t finished them yet so no images are available, but they are being created specifically for the Art Market here in Lauzerte which will take place every wednesday evening in July and August.  So, they are small and a bit more figurative than my usual work.  BUT they are going to be red, so some things never change.   They have been inspired by the big ceramic vases and pots I made sketches of at Turn End Gardens, Haddenham in Buckinghamshire last year.

Some of my other more abstract small etchings will also be on show.   And cards of course.  I will be “exhibiting” with Chris Collister (photos), Marjon Mudde (etchings) and Rafaele Rohn (textiles).  Check out the poster below for more details……

For an art market taster, those of you in the area are welcome to come along to the inauguration of a “pop up” show that has just, well, “popped up” in Lauzerte.  The inauguration is on Monday 26 June at 6.30pm Galerie 34, Rue de la Garrigue.

OK, so I didn’t actually sell any etchings at the JEMA weekend – several cards, no etchings – so I cheered myself up by doing an artist’s book session with Marjon Mudde the following weekend.  I  have made several books with Marjon’s help, and do find it quite restful -= although I am pretty rubbish with the sewing side of things.  This time I was so ham-fisted I even failed to make a plait fastening, so had to twist some strands of cotton together instead.  Anyway, here is a picture of my new book…… the first with a hard cover.   Its about time I photographed the other books I have made, so watch this space….

Posted on March 3, 2017 by rosalind marchant

Yes, it’s definite, I am taking part in JEMA this year at the ADPIC studio in Lauzerte.  And here is the leaflet to prove it…..

OKAY, so it’s a bit TEENSY, but my work will be on show on March 31st, April 1st & 2nd along with another printer, a textiles designer and a potter. 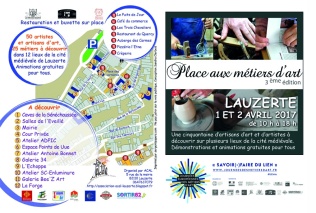 The hot news in town though is that there MIGHT be an art market in the square at Lauzerte every wednesday evening during July and August.  Must order some  more cards….

Posted on February 20, 2017 by rosalind marchant

Posted on February 20, 2017 by rosalind marchant

I have just signed  up to show my work at a friend’s studio in Lauzerte during a national “arts and craft” weekend called  “Les Journées Européennes des Métiers d’Art ” (JEMA).   JEMA takes place during the first weekend of April…. well, Friday 31 march until Sunday 2 April….  and our show at 22 Grand’ Rue in Lauzerte is called “Impressions et Matières”.    The show will include my prints alongside the prints of Marjon Mudde, work by her daughter Rafaele Rohn (Textiles Designer) and Ceramicist, Jean Francois Delorme.

Take a look at the JEMA website and see what you think!  These sort of national events for visual artists are rare in France so I am  pleased to be involved.   I did take a stand at a large group event for JEMA a couple of years ago, but it was so exhausting that I took a break last year.  I am sure that sharing a small exhibition venue with friends will be less stressful this time round!

Here is the link: 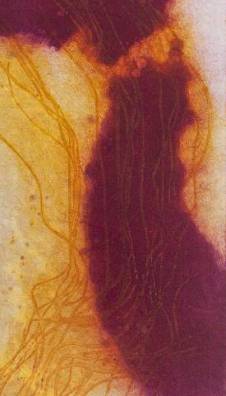 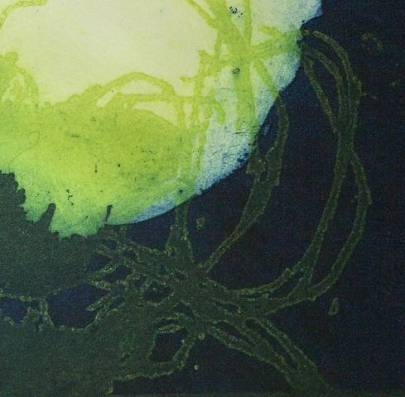 Posted on October 21, 2016 by rosalind marchant

I may not have made many prints lately, but I have been involved in making quite a lot of money for a charity here called “AIDE ET ESPOIR AUX REFUGIES”, which supports syrian refugees in Greece.  Last Sunday (16 october) we arranged an auction of 30 works of art – including 2 of mine – and also lay on some fantastic “apéros garnis” for the 60 “punters” who came along and willingly parted with nearly 4000 euros of their hard earned cash – well, it WAS a good cause.  One of  my “Pelerinage” prints was bought by a friend who “loved the pink”, and another print set up a bit of a  bidding war and finally sold for double the guide price!

It’s a small figurative landscape of Dartmoor that I made years ago when visiting friends.  I  had forgotten all about it until I came across it this summer in my Somerset studio.  It might easily have been missed because we were in the midst of a frenzied attempt to clear the place out before selling up and moving out, but fortunately it came  back to France with us and…. voila!    I now have an order for another, so I hope I can find the plate!  So, the lesson for today is – don’t turn your back on old prints, they may still have a place in your life!

Posted on August 7, 2016 by rosalind marchant

So, the first weekend of my mini “Open Studio” event has just ended with a total of TEN VISITORS (including the mayor and his wife) and ONE sale.  The sale was a very bizarre affair involving what must have been a “coup de foudre” on behalf of the purchaser who also insisted that I write – “to my darling baker, with lots of love from Ros” on the back in french!  He IS actually one of the local bakers and runs a shop called “Pain et Chocolat” which always amuses me……..  can chocolate possibly ever be painful?  Ho ho…..

Below is the aforementioned sale – “Plat du Jour 2”.  Thank you Jêrome!

Let’s hope we have more visitors (and more sales) next weekend!

Posted on August 1, 2016 by rosalind marchant

The last few months have been pretty quiet for me, artistically speaking, so it’s time to get moving again and get back into the studio.  How about an OPEN STUDIO event to perk me up a bit – or scare me into action, perhaps!

Summer has arrived in Lauzerte and the village is awash with visitors.  Let’s  hope some of them are art lovers and that they will wander past  my studio and then wander INTO the studio.  They might even stand in the doorway, open mouthed with amazement, before buying at least six of my gorgeous colourful abstract prints!    PIGS MIGHT FLY …..  but a girl can dream can’t she?

Anyway, the studio address is RUE DE LA BRECHE, LAUZERTE  (Behind the old pharmacie, or, if you are a stranger to these parts ….  up the steps beside the Pizzeria).  Studio opening days and hours are: 6.7.13.14.August (3pm-6pm).  I will mainly be exhibiting my Australian prints, and the Plat du Jour series of prints, as well as making new prints AND cups as tea as well….  there’s multi-tasking for you.  There is still life in the old girl yet! 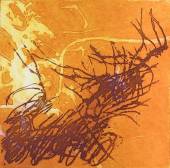 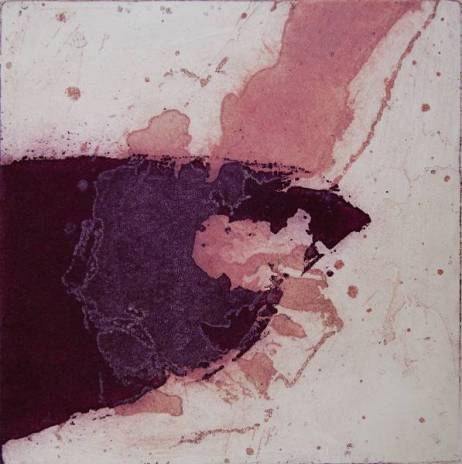